Valen is a Senior Producer here at Red Arrow Industries. She’s worked as both a field producer and post producer on wide variety of projects for HGTV, DIY Network, Food Network, Animal Planet, History, and FYI Network (to name a few). In addition to being an incredibly talented and hardworking Producer, she’s an adventure seeker at heart who loves to travel for both work and pleasure. Recently, she sat down with us to talk about some of her experiences in the field and to give us some insight into the dream job she didn’t know she wanted. 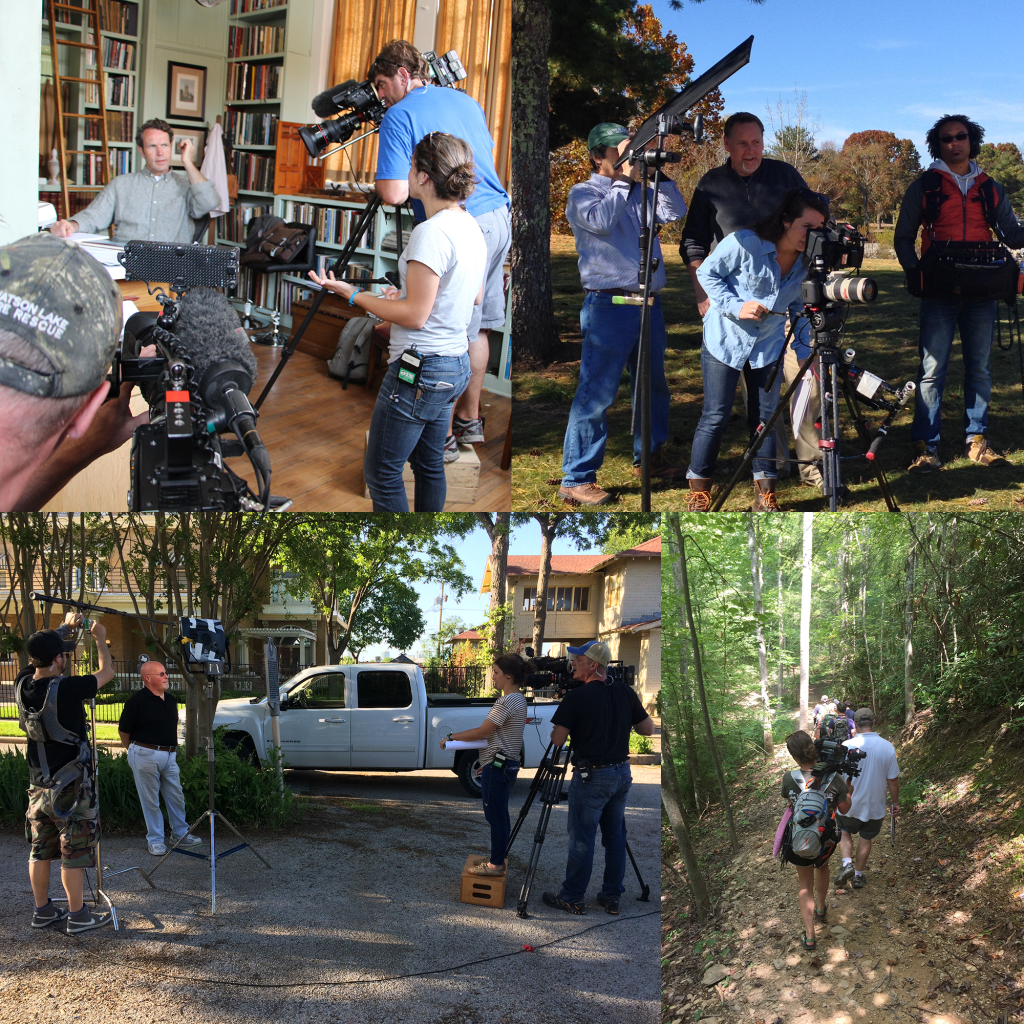 What do you do as Senior Producer here at Red Arrow?
There’s no definition for being a senior producer. Depending on the day, it could be a variety of things – from taking measurements and scout photos at a location to discussing the looks and stylized elements of the shoot and determining the camera/lighting equipment needed to accomplish these looks. My favorite days typically end in exhaustion from running around set for 15 hours with any number of clients, network execs, network talent, hosts, crew members, homeowners, etc. There’s so much going on – you’re directing cameras, coordinating the intricacies between construction/landscaping teams and film crews, chasing daylight and dealing with schedules. There’s no telling what sort of craziness will happen, and that’s what makes it exciting.Your head needs to be on a swivel and your problem-solving cap needs to be on. Being a producer is one of those titles that could mean anything depending on the shoot and that’s why I like it.

Why did you choose TV production?
TV production chose me…But really, I fell into TV. I actually thought I would be writing feature pieces for magazines. Then I procrastinated on getting an internship I needed to graduate and along came Red Arrow. I’ve been here ever since and now couldn’t imagine trading the pace of TV for the (much slower) pace of feature writing.

What’s your favorite part of your job and why?
Having a job where I’m not sitting in a cube everyday was always a goal. Being on the road and having the ability to work anywhere with WIFI is perfect for me. One day we’re fighting the sun in San Diego and the next we’re huffing gear down the streets of NYC in pouring rain or scouting locations in several feet of snow in the mid-west. New places with new challenges keeps me on my toes.

Travel is a big part of what you do. What’s the longest streak you’ve spent away, and where were you?
The longest streak on the road was, I believe, 9 months in Fort Worth, TX. Fortunately, Fort Worth is an amazing city with a great balance of the outdoors and city life. It had plenty of festivals, great restaurants – most of them being purveyors of tacos, chips & salsa, margaritas or cold beer –miles of greenways (so I could visit the aforementioned restaurants guilt-free), and I made wonderful friends there. I could drastically contrast this to other visits to towns not nearly as charming, but now is not the time for that.

What’s the hardest thing about your job, and how do you overcome it?
While traveling is one of my favorite perks of the job, it does come with its drawbacks. When you miss family events, friends’ kids being born or big moments at home, it’s always tough and doesn’t get easier. I try to make a concerted effort when I’m home to pack out my calendar to see my grandparents (who are the coolest in the world), visit with family, catch up with friends, travel for fun and have plenty of biking/hiking/kayaking adventures here in Tennessee, typically with beers to follow.

What’s the best advice you’ve ever received?
I think the great movie Baby Mama, is riddled with advice, but my favorite has to be, “Play it fast & loose – see how it all shakes out.” Or Lion King’s, “Hakuna Matata.” These are two quotes to live by.

In an effort to not plagiarize though, I think some of the best advice comes down to treating people the way you want to be treated – Golden Rule stuff. And, when you get past the Golden Rule, “fake it until you make it” can always be applicable. To bring that one to life, I think a huge part of any job in today’s culture (let’s give the exception of doctors and other extremely specialized fields) is being able to take a task from point A to point B, C and so forth without constantly badgering your peers for help, needing every step laid out for you, etc. You can Google or YouTube anything you might not know how to do. If you do the task well, you’ll get larger, more important tasks. You can always learn from mistakes and ask for help, but showing the initiative and drive to not need someone to hold your hand as you figure out a task can go a really long way. I didn’t realize how much this mattered until I was overseeing several positions and someone mentioned to me how when she first started, she had no clue what I was asking her to do – however she figured it out through useful tools on the internet and progressed really rapidly because she was willing to go the extra mile from the very start.

Being born and raised in East Tennessee sometimes comes with its own language or jargon. What’s your favorite southern saying, and what does it mean?
This is a hard question to answer because it’s not “East Tennessee” to me, it’s just how I talk. I crowd sourced a few phrases friends have heard me use and came up with, “doesn’t amount to a hill of beans,” “madder than an old wet hen,” “what’s that got to do with the price of tea in China?”  “like a lost ball in tall weeds” – the list could go on. And, while there are many words that I often use that I don’t realize are not in everyone’s everyday vocabulary, here are two of my most used – “druthers” and “reckon.” My mom and dad are really the masters of East TN phrases. I would say one of my favorites is “it’s a frog strangler” of course just meaning a really heavy rain.