Living and Working in The Maker City

Nov 10 2017 Posted by Taylor Harris in
by Taylor Harris
Casting Director and Brand Manager, Red Arrow Industries
Co-Founder of The Retropolitan Craft Fair
Living and working in Knoxville has many benefits, the most recent being its status as Etsy’s first official Maker City in the United States. Etsy started their Maker City grant program to further promote economic prosperity for makers and creative local businesses. Their goal is to invest resources into cities already taking steps to empower small business owners and create an environment in which these local artisans can thrive. As co-founder of a maker-centric business myself, I’ve reaped the benefits of living in a Maker City first hand. I’ve had pleasure of working with two remarkable women who are also two of my closest friends, Lacey Strike and Alyssa Maddox, to co-found The Retropolitan Craft Fair, the first indie craft event of its kind in Knoxville. The maker community is dear to our hearts, and I’m beyond thrilled to be living and working in a Maker City. So what does it mean to be a Maker City in practice? I’m glad you asked because I like talking about it.
COMMUNICATION BETWEEN THE MAKER COMMUNITY & CITY GOVERNMENT
Support from the city is crucial to the success of small businesses, which is why, shortly after Mayor Madeline Rogero announced that Knoxville’s official Maker City status, she also announced the formation of the Mayor’s Maker Council. This handpicked group of creatives and representatives of Knoxville businesses meet with Mayor Rogero to give a voice to the maker community when it comes to government policies and regulations that affect small businesses. Want to learn more about the men and women of the Mayor’s Maker Council? Check out the list below and click the hyperlinks to learn more about the businesses they represent.
Mayor’s Maker Council

They are also supported by some great folks with the City of Knoxville, Knoxville Entrepreneur Center, and a few others:

If you’ve ever tried to start your own businesses, you know there are all sorts of barriers to entry and growing pains. How do you reach your target audience? How do you manage demand once business picks up? When do you quit your day job? When is it time to hire employees and how do you handle that? This is where maker education comes in, and what better place to learn than a Maker City Summit? In May 2016, a team from Knoxville was invited to attend Etsy’s first ever Maker City Summit in Brooklyn, NY. They came together with business owners and city officials from all over the United States to talk about the impact of city infrastructure and regulations on micro-businesses, and how best to serve those businesses in their areas.

Knowing this was a valuable experience they wanted to give to makers and small businesses here locally, Knoxville hosted their very own Maker City Summit in September 2016 and again in 2017. The Retropolitan Craft Fair had the chance to participate as supporters of the maker community, sitting in on inspiring keynote speeches and making connections with other Knoxville area businesses. It was a full day of education and discussion where makers could get together and learn from each other as well as experienced keynote speakers, panelists, and one on one expert consultants. Our director, Alyssa Maddox, was even able to share her knowledge and background on the Ask the Experts panel.  Between all the experts and panelists, there was a breadth of knowledge. Need quick legal advice or some pointers on maximizing your social media footprint? There’s someone who can help. These summits have been a huge success so far, and we can’t wait to see what next year has in store. 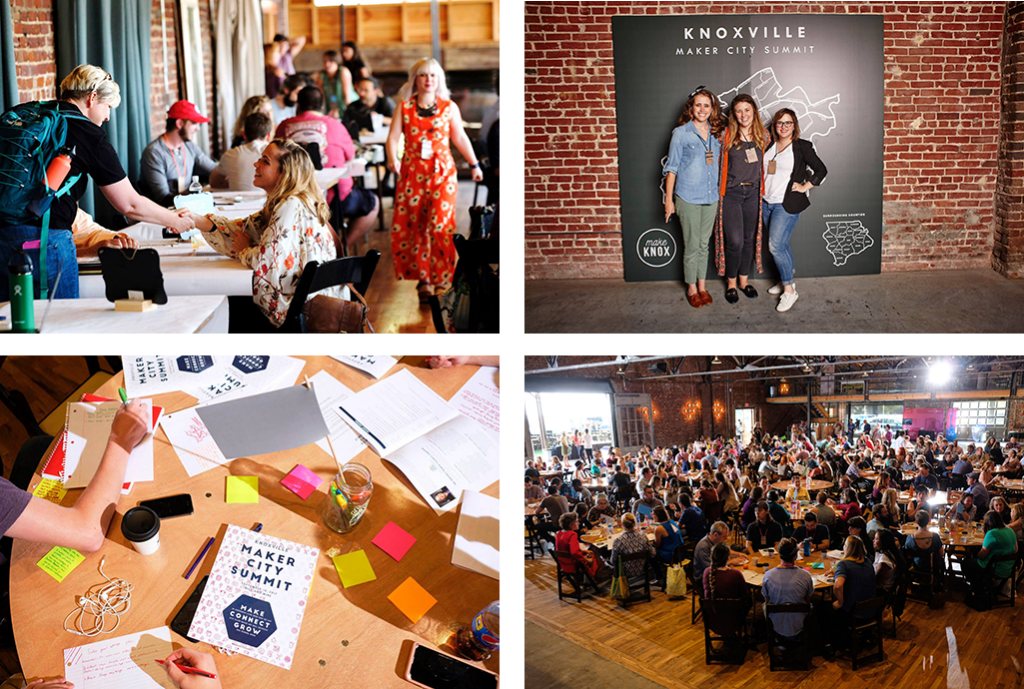 BRANDING AND PROMOTION OF THE MAKER CITY

Branding of the Maker City movement is essential to making the most of it going forward. Designsensory, a marketing and and advertising agency here in Knoxville, unveiled the official logo at the September 2017 Maker City Summit, and they knocked it out of the park. As participants of the summit, we received logo t-shirts, but quite frankly, I want it on everything. Check out the branding video here. 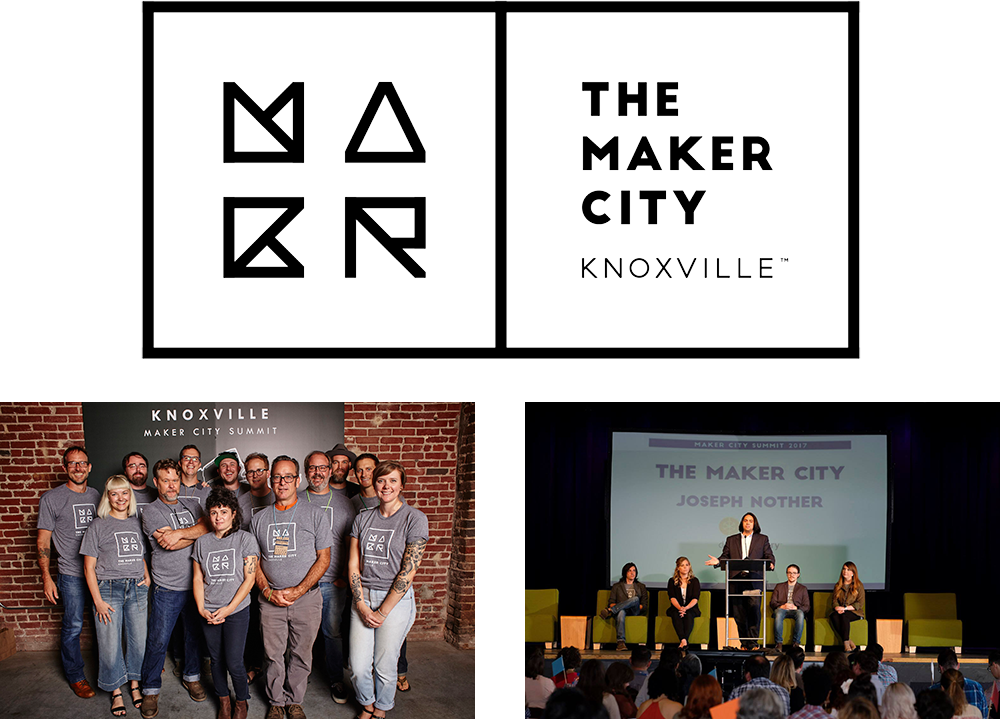 I’m proud to live and work in the Maker City, and I’m thankful to work for a company who supports its employees’ involvement in the maker community. In March of 2014, The Retropolitan Craft Fair put on its first indie craft fair to create a platform for regional makers to sell their unique goods in the relatively untapped Knoxville market. Since then, we’ve more than doubled our number of vendors and quadrupled our shoppers, and we’re throwing our eighth fair Sunday, November 19th at Jackson Terminal. Our success depends on the success of our makers, so many of whom have gone on to see their businesses expand and, in some cases, have even opened their own brick and mortar stores. So much of their success depends on the opportunities they have in our community, which is why Knoxville becoming a Maker City is so important to us. We’re excited to be thriving in The Maker City, and we look forward to being part of everything to come!

For more background on the making of the fair, check out this interview on Red Arrow’s from back in May.

Looking for more local makers to shop this holiday season? Follow @themakercity on Instagram and check out their gift guide posts! 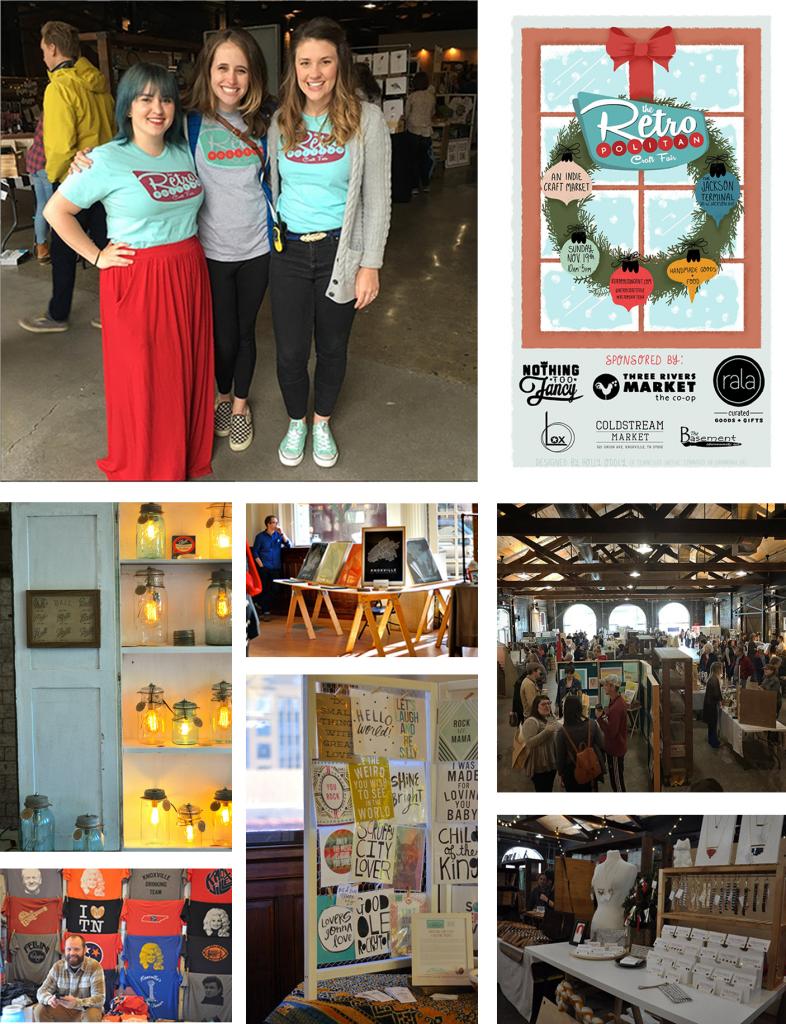